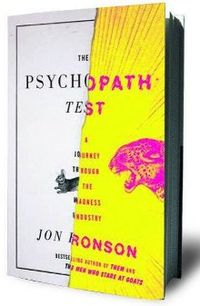 I was introduced to this book by a show on This American Life (not sure if it was that show or this one) & a friend recommended it as well.

The rise of Psychology & Psychiatry:

Components of the PCL-R Checklist:

Bob Hare is afraid the checklist is sometimes misused by the US prison system. Some people might go in using poor analysis, which in turn makes it much harder to be seen as sane.

In 2007 the LA Times reported that 1/3 of Coalinga State Hospital inmates would serve no risk to society if released.

Bob Hare met Jon Ronson numerous times while he was writing The Psychopath Test, but thought the treatment of psychopathy in the book unfortunately trivialized it.