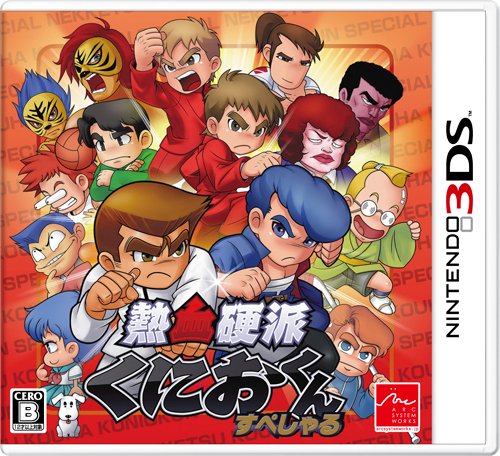 Here’s a playlist video walkthrough of this game.

If I were more clever I would have realized the need to buy a Japanese Nintendo 3DS to play this game (熱血硬派くにおくん すぺしゃる) was a hint that I could have put it off buying it until later, hoping for a translation.

The joy of beat em up games is not in Final Fantasy styled text heavy quests, but in just the repetitive battles & finding ways to cheese the opponents.

It is somewhat masochistic to play foreign language games in languages you don’t know how to read, where you need to talk to random characters in order to unlock events elsewhere in the game. My River City Ransom nostalgia was strong, so I couldn’t help myself. 😉

Most of the missions in mission mode was fairly easy, the battle royal mode was fun & simple, and the arcade mode wasn’t too bad other than having to get used to knowing if you attack the direction you are facing it will punch & if you hit the other button it will kick in the opposite direction (so the direction you are facing controls what is a kick vs punch rather than one button always being for punch & the other for kick). The one hard part with the arcade mode was where there were one-hit knife guys who would stab you to death in a single blow. Sometimes when you are moving closer to a character it will engage in a grapple, leaving you immobile for the back stab instant death. My solution to that was to rely heavily on the jump kick & try not to press over when doing the jump kicks. I think I tried beating those guys dozens of times to no avail, but when I adopted the strategy of minimizing walking while attacking I was able to beat the arcade game without dying & beat it 3 times on the continue.

Where I ran into a bit of a trouble (leading me to incorrectly spend/waste a few hours grinding) was after exiting to the right of the Shinjuku Station in the story mode.

In the story mode where I got stuck was to the right of Shinjuku Station. When you exit Shinjuku Station and head right, the first screen should have the girl’s missing dog in it. When I played it didn’t. And not only was the dog missing, but that area to the right there is tricky in terms of loops. For instance, you can get different screens depending the order of your directions. Like if you go down then right then down then right you come out at another town (and in the middle of that process there is a guy with a sign offering for you to play mini baseball where you try to hit homeruns). Or if you go up twice then right twice you can see the guy with the white outfit on in that same screen instead.

How I got hosed there is by seeing the different variations in those screens I thought it was sort of like the original Zelda (left, down, left, up, left in the secret woods), but nope my problem was the dog wasn’t on the initial screen. I had already talked to the girl who told me her dog was missing, but apparently my character also needed to speak to someone on the ground floor inside the school (a boy who is just left of the rows of lockers). Then after I spoke to him as well, when I went to the right of Shinjuku Station the dog was there & the game was pretty close to over given how over powered my character was. After you fight the guy who was kicking the dog, you then go back to tell the girl about her dog & the dog runs up to greet her. You then have to head back over to the same area the dog was at, but then you go right twice, up, left, right (this screen has the guy with white on who you talk to), then after talking to him you go down & it is to an arcade.

A couple of the “secret shop” locations…

And for lovers of dragon feet or stone hands, perhaps more important than the secret shops is where you find those rapid attack moves. In the overview screen where there is the school in the top row, the town in the bottom row has a bookstore in it. the top 2 books cost 3000 yen each. the first one is stone hands & the second is dragon feet. Many of the books require you to go into your inventory list to activate them.

The English language search results for walkthroughs on this game are absolutely atrocious, because they are either walkthroughs for other games from the series, or they are empty holder pages on authority websites.

The one site which had a decent walkthrough was YouTube, but there was a sea of noise there. Here’s a playlist of the videos from that solid walkthrough. The end of video 8 & beginning of video 9 show the dog at the beginning of the screen to the right of the train station. If you are stuck at any other point in the game those videos are a great starting point.

And the Kunio Kun hits keep coming as the River City Ransom Underground KickStarter project from Conatus Creative was funded & there are a number of other Kunio-Kun games on 3DS to check out. I already have Nekketsu Kouha Kunio-Kun SP: Rantou Kyousoukyoku. If I can figure out how to buy from the Japan Nintendo DS eShop I might also give Nekketsu Mahou Monogatari & Riki Densetsu a try.